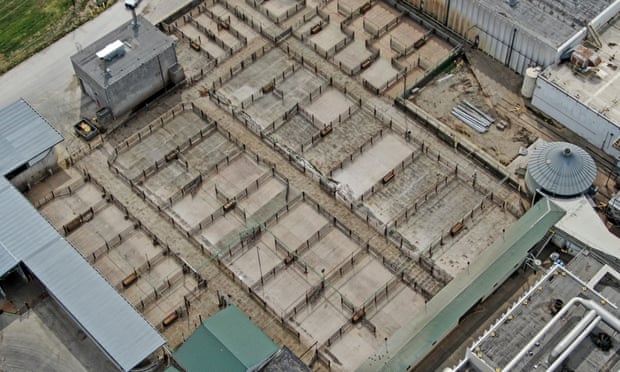 US government vets said to be ready to assist with culls, or ‘depopulation’ of pigs, chickens and cattle because of coronavirus meat plant closures

Covid-related slaughterhouse shutdowns in the US are leading to fears of meat shortages and price rises, while farmers are being forced to consider “depopulating” their animals.

More than 20 slaughterhouses have been forced to close, although some have subsequently reopened. On Tuesday President Trump issued an executive order to keep slaughterhouses open which would, he said, help solve liability problems for meat companies.

At least two million animals have already reportedly been culled on farm, and that number is expected to rise. Approved methods for slaughtering poultry include slow suffocation by covering them with foam, or by shutting off the ventilation into the barns.

A nationwide advisory issued last Friday by the US Department of Agriculture and the Animal and Plant Health Inspection Service said state veterinarians and government officials would be ready to assist with culls, or “depopulation”, if alternatives could not be found.

The advisory was described by Leah Garcés, president of US welfare organisation Mercy for Animals, as a clear indication of a national farm animal emergency. Garcés told the Guardian that chickens are most at risk, followed by piglets. “Chickens are bred for speedy growth and are meant to be slaughtered at between 42 and 47 days. After that they die.”

Political leaders in Iowa – the biggest pig producing state in the US – have warned that producers could be forced to kill 700,000 pigs a week due to meat plant slowdowns or closures. The situation has been exacerbated by consolidation within the sector, with the number of meat plants having fallen by half in 45 years.

An 8 April letter from the chicken producer Allen Harim, seen as a photo by the Guardian, said that as of 10 April the company “will begin depopulating flocks in the field”. The letter went on to tell contract farmers that “growers, whose flocks we depopulate, will be fairly compensated”. It was signed by Michele V Minton, director of live operations.

Foaming means covering hens with a layer of foam that blocks their airways, gradually suffocating them over several minutes. Ventilation shutdown, meanwhile, although described by the AVMA as “not preferred”, is one of the cruellest, but cheapest options, said Garcés. “Shutting down broiler chicken house ventilation systems means animals die of organ failure due to overheating, as temperatures quickly rise.”

An AVMA spokesperson said the guidelines list several methods of depopulation that may be considered in emergency situations. “Each decision to depopulate animals is unique, and the myriad factors surrounding that decision and those animals need to be considered on a case-by-case basis to determine the most appropriate method in that situation, with as much consideration given to the welfare of the animals as practicable.”

Tyson Foods, one of America’s largest meat producers, has closed or reduced production at several facilities throughout the US, including a pork-processing plant in Iowa, where several workers tested positive for Covid-19. Tyson plants in Texas and Indiana also closed. Other facilities, including a Smithfield Foods pork plant in South Dakota, and a JBS beef plant in Wisconsin, have announced temporary shutdowns.

On Sunday Tyson chairman, John Tyson, warned in a blog post that: “In addition to meat shortages, this is a serious food waste issue. Farmers across the nation simply will not have anywhere to sell their livestock to be processed, when they could have fed the nation. Millions of animals – chickens, pigs and cattle – will be depopulated because of the closure of our processing facilities. The food supply chain is breaking.”

In a 14 April statement, the president of the National Pork Producers Council (NPPC), Howard Roth, said that the combination of restaurant and slaughterhouse suspensions meant pigs “are backing up on farms with nowhere to go, leaving farmers with tragic choices to make [because] hog farmers have nowhere to move their hogs.”

A spokesperson for the NPPC said: “On the topic of euthanasia, our farmers are focused on doing the right thing for their animals and employees while raising food for consumers. Euthanasia is always a devastating last resort for any farmer. However, when farmers cannot send pigs to market, barns can become overcrowded, limiting access to food and water and present significant animal welfare challenges. The farmers we represent believe it is unethical to allow any animal to suffer.”

Slaughterhouses are acknowledged to be the vulnerable point in the meat supply chain. A huge amount of consolidation in the last few decades means that both the US and EU have fewer, larger meat processing plants.

When a single US Tyson beef plant was shut down by a fire last summer, it caused a market shock that some called “historically significant”. The margins for beef carcasses doubled, while prices for live cattle fell. This is because shutdowns mean farmers may not be able to take their cattle to slaughter, and will then face unexpected costs in feed and care.

“It is not a broken system by any means,” said senior analyst with Agribusiness Intelligence in Memphis, Adam Speck.

“It is a black swan event. There are hogs available. We are full to the brim. But when we are down about 23% in hog harvesting capacity and we can’t process at normal rates, then the only option is to depopulate.”

“Chickens have a super-short life. I understand they started euthanising them about the second week of April and the cull must be in the millions now. We might be down about 10% of current chicken availability now.”

“It’s going to be painful for the next few weeks until about mid-May when hopefully processing plants start to come back online.”

In Europe, by contrast, the situation appears reversed, as slaughterhouses remain open and intensive pig and poultry farmers benefit from lockdown shopping sprees for home cooking.

“The main cause of the supply chain problems in the US seems to be Covid-19 and the number of sick workers at slaughterhouses,” said Professor Peter Sandøe at the University of Copenhagen’s Department of Food and Resource Economics.

In Denmark, a major European exporter of pork and chicken, slaughterhouses are still running and “intensive pig and poultry farmers are doing OK thanks to consumer demands both locally and in the countries’ we are exporting to,” said Sandøe.

In the UK the situation appears to be similar. “The irony is that smaller, more sustainable farmers are the hardest hit while supermarkets in the UK stock up on the cheapest, most intensively reared pork and poultry,” said Patrick Holden, dairy farmer and founder of the Sustainable Food Trust.